"THE YEAR OF THE WOMEN AND WHAT WOMEN THEY WERE." 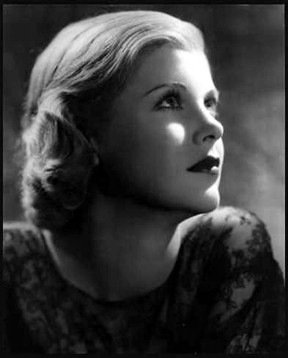 She was the toast of the critics who hailed her as the screen's most promising young actress, she was possessed of such extraordinary beauty that cameramen said she had the perfect camera face, she was a social activist in the frontline of the battles for labor and civil rights, she became the only player ever fired from a TV show for her political beliefs during the 1950s blacklist. She went on to overcome these later difficulties and enjoy a most productive second career as a college drama instructor. A veteran of 28 films made from 1933 to 1943, the majority under contract to Warner Bros., she was one of the first performers to be honored with a star on the Hollywood Walk of Fame. Yet in her centennial year, Jean Muir has been strangely forgotten. There are currently no websites or major Internet articles devoted to Jean, while TCM, the owner of most of her films, despite often showing them, has never highlighted her career as they should have. Mention is sometimes made of her blacklisting in brief articles, along with the claim 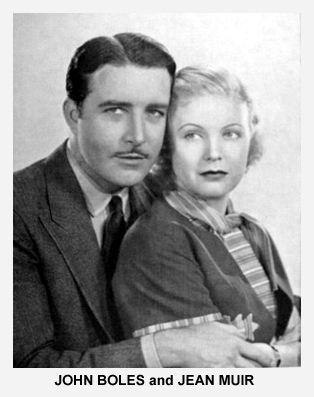 that her career foundered in B pictures, but this slight account is misleading. Whatever the disappointments in the course of her career, Jean Muir left us with a lasting legacy of memorable performances on film. Every film in which she appeared was touched with the special magic she contributed. Her breathtaking blonde beauty allied with formidable talent as an actress gave her an irresistible allure. "New York Times" critic Andre Sennwald, reviewing Jean's "fresh and truthful piece of acting" in DESIRABLE (1934), described her as a "pale, blonde girl, with a touching honesty and directness of manner, and a throaty voice which adds a new emotion to her words," a performer who "touches the imagination." Similarly, the "Los Angeles Times"' Grace Kingsley wrote of her performance in DRAEGERMAN COURAGE (1937): "A fine portrayal is given by Jean Muir, whose emotional reactions to situations are poignant and effective." Crtitics compared her to another luminous blonde, Lillian Gish, and indeed, Lillian's close friend, famed dramatic critic George Jean Nathan, hailed Jean's performance in DESIRABLE as the most outstanding given by a screen actress in 1934. 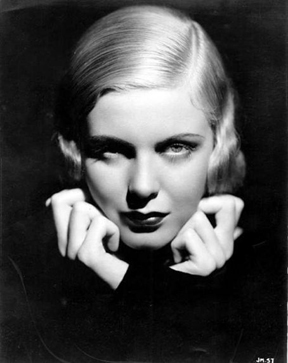 It was my privilege to know and interview Jean in her last years for my book, "At the Center of the Frame." Her kindness, warmth and intelligence, her dedication to social justice, her wonderful sense of humor are cherished memories. Despite failing health, she had retained the qualities that had made her such a unique and dynamic presence in the of the '30s. On the occasion of her return to the screen for what would be her final film, THE CONSTANT NYMPH, a news article published in March of 1942 termed her "the most rebellious actress of the 1930s." While preferring to avoid most of the big parties along with a lavish lifestyle, Jean nevertheless made an indelible 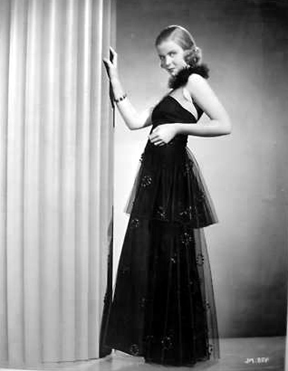 impression on the film colony. Whether clashing with studio management in confrontations that caused her to be labeled "the studio pest" or racing her modest little Ford coupe at speeds that were daring even by filmland standards, Jean was constantly in the news. Everyone was reading about the terrier that accompanied her everywhere and the actor's workshop she started in to stage plays and further enhance the quality of acting in the industry. A feminist who once expressed a desire to be in a film about Susan B. Anthony, Jean, with her friend Gloria Stuart, was one of the two actresses most closely involved with the formation of the Screen Actors Guild in the 1930s. For all her seriousness, she always demonstrated a delightful playfulness and vivacity, quipping about her fabled beauty to a reporter in 1934, "I'm a heck of a combination. I have a Garbo body and a Gish face." 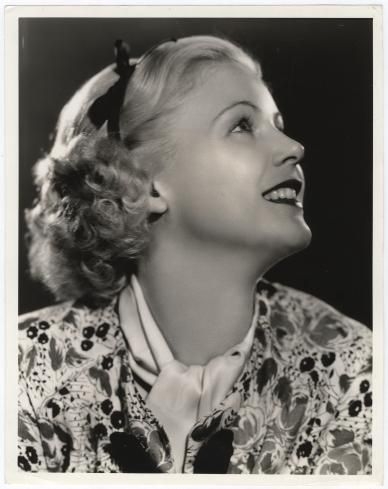 To make up for the paucity of Internet material available on her, I have linked this post to several contemporary articles profiling Jean, one of them written by the legendary future war correspondent, Ernie Pyle. I have also included articles about the passionate commitment to social justice that would later lead to her 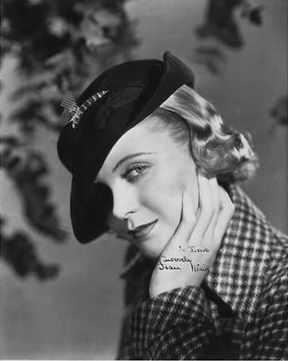 victimization by reactionary forces in the McCarthy era. These pieces are only a minute fraction of all that was published about this remarkable woman. It is my hope, though, that this tribute to a friend will help in some manner to bring fresh awareness to a brilliant artist and compassionate human being whose screen performances remain as powerful and effective as the day the films were released.

A picture of grace and beauty, Ginger Rogers, while attaining the highest rank in royalty, always retained the common touch in superlative performances that made her the perfect representation of the working girl. Her great talent as an actress enabled her to portray a wide variety of roles with equal ability in both comedy and drama. There was the sly wit she brought to her effervescent playing in such delightful satires of American life as PROFESSIONAL SWEETHEART and ROXIE HART. In dramatic roles, she more than held her own co-starring with Katharine Hepburn as a fellow theatrical aspirant in STAGE DOOR, and gave naturalistic performances of young women from the working class struggling to survive in her Oscar-winning KITTY FOYLE and THE PRIMROSE PATH. Her brilliant acting in the latter film so impressed Theodore Dreiser that he thought she would be ideal for his SISTER

CARRIE, the role that would later be given to Jennifer Jones.

It is, of course, her films with Fred Astaire for which Ginger is best remembered. While there have been those writers who have almost taken her presence in these classic films for granted, placing their main emphasis on her leading man, in truth, Astaire and were a team of equals. With a unique chemistry felicitously blending tension and harmony, Fred and Ginger created a magic on the screen that made their films together among the greatest and most memorable in cinema history.

Inherent throughout Ginger's remarkable career was a strong feminist assertiveness. In 1958, she expressed the sentiments always at the heart of her work as a performer in an interview in which she urged the passage of equal rights legislation. Several years before the publication of "The Feminine Mystique" launched a new wave of feminism in the 1960s, Ginger did not hesitate to use the "o" word - "oppression" - to describe the current status of women in her society. As part of my tribute to this shining star on the occasion of her centennial, the article is reprinted here.

To learn more about the legendary actress, visit the very comprehensive blogspot, "Gingerology: the beautiful science of Miss Ginger Rogers," at: http://jwhueyblog.blogspot.com

I am late to the party due to my having to complete additional work on a soon-to-be published book on early film history of which I will have much more to say. But I would very much like to pay tribute to the extraordinary phenomenon known as Jean Harlow in this, the year of her centenary. When I have spoken to her friends in , they retained the warmest of memories of Jean. Madge Bellamy said Jean was "a fragile, lovable girl" who was "very sweet and quiet and not the voluptuous type at all." Similarly, Anita Page described Jean as "much more sensitive than people realize" and "a dear, sweet girl" who once said to her, "If I ever have a little girl, I want her to be just like you, Anita." The sexy, dynamic characters Jean played on screen thus seemed to be quite different from her off-screen personality.

Yet Jean did, in fact, possess a genuine wit and intelligence that illuminated her magnificent performances in films. It is said that one day, while in a beauty parlor Jean heard a woman in the next booth say, "I know Jean Harlow wears a wig, because my sister makes them for her." In response, Jean poked her head in the lady's booth and said, "I am so glad to meet the sister of my wig-maker and will you tell her I just came in and had the darned thing washed."

Nicknamed "the Baby," Jean, in truth, grew into a woman in her years on the screen, one who was very conscious of her rights. The following interview appeared in the press in 1937 a few months before her tragic death at 26. The views she expressed on the subject of women's rights were very much a part of who she was both as an individual and an actress,

providing an indication of the remarkable spirit and talent that made the stunningly beautiful blonde one of the most brilliant stars ever to illuminate the screen.

With her infectious grin, roguish brown eyes and saucy "little girl" voice, Dorothy Lee was never cut out for a quiet, sedate life. She was born in on , a birthday she shared with her idol, Douglas Fairbanks, Sr. who sent her an autographed photo when she was a child. Always a tomboy, Dottie rebelled against an early attempt to turn her into a proper young lady at an elite girls' school and found a natural outlet for her infinite vitality in athletics, on the stage, and ultimately the screen. The scintillating, pint-sized beauty found lasting cinematic immortality teamed with the great comedy team of Bert Wheeler and Robert Woolsey in a classic series of zany comedies for RKO. The vivacious, auburn-haired flapper proved the perfect soubrette as she became involved in the hilarious complications ensuing from the wild schemes of Bert and Bob. Her ability at singing and dancing was also showcased in the many delightful musical numbers included in the films. Much more than decorative, the mischievous Dottie could make things run, often taking center stage in her work with the team. In the tradition of Mabel Normand, she would do anything for a laugh, even risking life and limb for a dangerous stunt. Dottie recalled that "I never had a double throughout my career because I could do everything. I was brought up a tomboy and loved it." Dottie's insistence on doing her own stunts once resulted in a back injury as she was swinging from a chandelier in the glorious mock ballet in HIPS, HIPS, HOORAY! In COCKEYED CAVALIERS, she dressed as a boy "and in one scene, I jumped out of a window onto a horse. I rode bareback from the time I was old enough to get on a horse, so that was fun for me. They didn't want me to do it, but I wanted to jump because I was really crazy. I loved to do stuff like that."

I interviewed the lovely, warm, supremely talented Dottie for a chapter in my book, "At the Center of the Frame: Leading Ladies of the Twenties and Thirties," published in 1999 by Vestal Press. An excellent website dedicated to Dottie and her partners can be found at: http://www.oocities.org/hollywood/derby/4720/

There is also a nice entry at a classic film blog with links to YouTube clips of Dottie performing at:

I have been late in posting another entry on this site as the need to complete a new book on film history has consumed all my energies since the start of the year. However, with more time available to me, I will soon be adding to this page with more on the anniversaries connected with 1911, the year of some very remarkable women. And nothing can be a more appropriate starting point than the occasion of the centennial of a wonderful friend, the dazzling, beautiful, beloved Dorothy Lee.